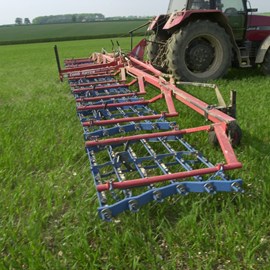 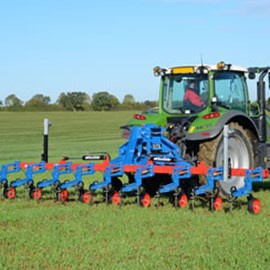 OPICO has been importing Hatzenbichler comb harrows, grass harrows and seeders since 1994 and has developed a strong relationship with the Austrian company. Hatzenbichler's impressive heritage in developing and manufacturing mechanical weeding machinery dates back to 1952.

With the changing political and environmental agenda OPICO believes that mechanical weeding is a commercially viable means of herbicide-free weed control for both organic and conventional farmers and has introduced a range of interrow cultivators from the Austrian firm.

Designed to rake across the full working width of the harrow beds the comb harrow is indiscriminate. The effective weeding action comes from the vibrating action of fine spring tines mounted onto contour-flexing bed frames. The tines vibrate vigorously from side to side as the harrow moves forward and relies on the crop roots being stronger than the weeds to withstand the raking action of the tines.  As soon as the weed root is as big as the crop root it is too late, so, multiple passes are required when weeds are small.  The comb harrow can also be used to create a stale seedbed prior to establishment and also for mechanical weeding when plants are young.

Designed to accurately hoe between rows of growing crops to cut off weeds just below the surface. Almost any crop with adequate space between the rows can be tackled so combinable crops, root crops, salad and specialist crops are all interrow hoe-able.  Hatzenbichler interrow cultivators are fully adjustable and can be configured to suit any row width or combination of row widths, front or rear mounted versions are available along with trailed or semi-mounted machines.  Machine configurations are endless with interrrow cultivators in working widths from 2.5m – 18m with 4 to 72 row options.  The type of crop and row width determines the type of tine and share required.

Technological advancements in steering and camera guidance have made it possible to weed accurately whilst travelling faster, significantly boosting work rates, meaning high speed and high output mechanical weeding is no longer the domain of organic farms.

OPICO interrow cultivators use the Tillett and Hague camera guidance system. The system, developed in the UK is the most accurate guidance on the market.