The OPICO grass harrowing concept simply transforms the way you work your grass. The angle of the tine combined with the overall design of the harrow makes it ideal for stimulating new grass or renovating old pastures.

With an OPICO Grass Harrow, leys can be re-vitalised and dry matter yields boosted. You can attach an OPICO Air Seeder, and oversow old worn leys to boost grass and clover content, or start afresh and put down a brand new ley with the harrow and seeder combination.

The OPICO Grass Harrow covers every inch of the ground, thanks to its unique contour flexing tine bed. It clears moss, opens the surface, improves aeration and encourages growth. Like all good ideas it is very simple and is now recommended by thousands of farmers who have switched to this common-sense approach to what used to be a ‘harrowing’ job.

The net effect is a more vigorous and re-vitalised ley, often appearing darker green thanks to the breakdown of the nitrogen cap on the soil surface which is made available to the grass.

The most important angle on the OPICO Grass Harrow is built into every tine. Firstly, its oil hardened spring wire has three times the service life of a normal sprung steel wire. The tine itself has an effective angle, but the tines within the bed can be adjusted allowing for ten different tine settings depending on the work to be done. 48 tines per 1.5m bed with 30mm spacing creates more pressure per tine point and good self cleaning action. The tine uses a triple coil spring which increases vibration and improves the harrowing effect. 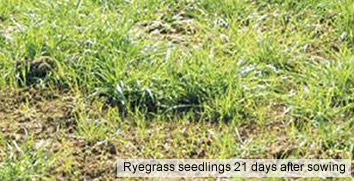 The OPICO Grass Harrow and Air Seeder are vital tools in finding that hidden profit in your pasture. Simple low cost operations such as over-seeding into an existing ley boost the yield and prolong the useful life of the sward whilst a complete re-seed rejuvenates the whole pasture bringing back vitality and maximum yields. The hidden profit, in terms of extra milk or increased live weight gain from forage rather than costly supplements, ends up where it belongs - in your pocket. In trials, grass yields have been increased by over 40% by re-seeding and up to 25% by over-seeding and more importantly the M.E. (Metabolisable Energy) of the fodder is improved considerably giving you better quality, low cost home produced feed.

The OPICO Air Seeder unit broadcasts the new seed consistently and evenly whilst the Grass Harrow creates the ideal tilth and then covers the seed in. Ten different tine angle settings and variable tine pressure coupled with an infinitely variable seed rate between 1 and 80 kg per hectare mean that you can set up the Grass Harrow and Seeder to do whichever job you want.

The Grass Harrow and Air Seeder can either be used for a full re-seed, to over-seed an existing ley or to patch seed damaged areas of a field.

Look after your grass

To ensure the long term productivity of your ley, an integrated approach to grassland management is required. Compaction and surface capping can be removed using an OPICO Sward Lifter and the ground can be further aerated to stimulate grass growth using a Sward Slitter. To ensure the correct pH and availability of nutrients for maximum grass growth, soil tests should be carried out to identify nutrient shortfalls and then fertiliser formulations and applications can be cost-effectively tailored to ensure a lack of nutrients is not reducing grass quantity and quality.

Inspections should also be carried out through the year to monitor weed populations. Herbicide and pesticide strategies can then be put in place to control weed infestations. Overseeding bare areas in winter-damaged leys with a harrow and seeder will also prevent weed ingress, and lengthen the life of the ley.

The OPICO Grass Harrow has revolutionised grass harrowing in recent years, larger working widths, more adjustment and aggressive spring tines mean that a better job can be achieved faster and at a lower cost. With typical working speeds of 4.5mph to 7mph the Grass Harrow is a high capacity machine, a 6m for example, is more than capable of covering over 100 acres in a normal working day. The Range Working widths range from a very handy 1.5m to 12.4m. There are rigid, mechanical and hydraulic folding units with a choice of 7mm or 8mm tines. The machines are designed for strength without the need for high horsepower and are equipped with a fully adjustable depth wheel, which works alongside the tine angle settings for maximum effectiveness. The hydraulic folding models have a single acting ram with an accumulator that applies 8-10 bar pressure over the full width of the harrow to give true contour following across the field.

The flexible design of the tine beds allow them to follow the contours of the land ensuring effective coverage and even tine pressure. Each 1.5m bed has 48 tines spaced at 30mm centres apart and as well as ensuring good tine pressure onto the ground, this design allows it to self-clean as it moves through the sward. 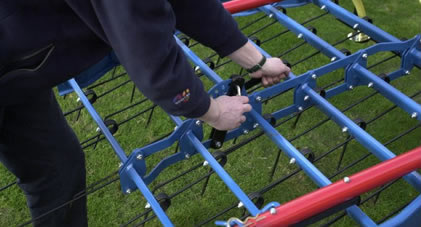 Quick and simple tine angle and pressure adjustment, ground conditions will determine how aggressive tine pressure needs to be for effective harrowing. On the OPICO Grass Harrow there are 10 tine angle settings so pressure can be altered, ensuring the vibrating action of the triple coil spring tine can be maximised. 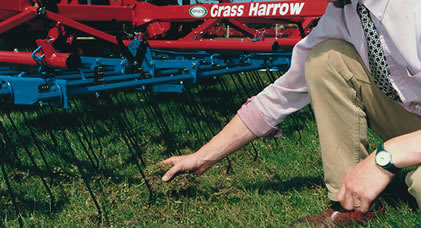 The Grass Harrow's spring tines are able to penetrate even the hardest of ground, ripping out dead thatch and opening up the soil surface allowing air in to the root zone to stimulate and encourage growth. The oil hardened spring wire has three times the service life of a normal sprung steel wire. Channel mounting of tine coil prevents damage to the growing tip and leaf of the grass. 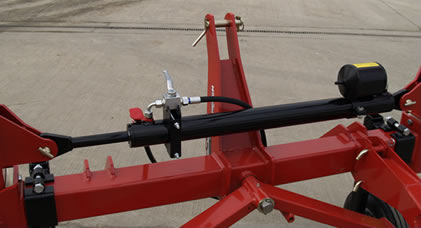 The construction of the headstock consists of interlocking pieces of steel so the Grass Harrow doesn’t just rely on the welding for strength. The frames and beds are powder-coated and most of the other steel parts are anodised so your harrow will stay in good working order and looking newer for longer. 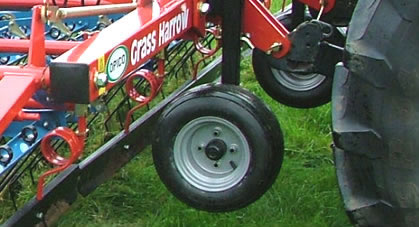 When in transport position, the hydraulic folding models fold up between 2.5m and 3m dependant on the model of grass harrow. This allows easy transportation on the road and through narrow gateways. 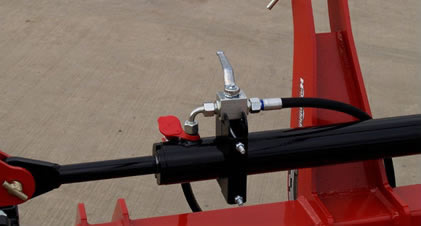 Hydraulic cylinder with accumulator and hydraulic shut-off valve can be locked for safe road transport.

OPICO Grass Harrow and Seeder Product Walk Around
Back to top

All three models can be supplied with either Category 1 or 2 pins if specified at the time of order. 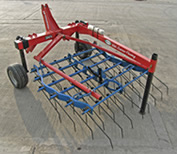 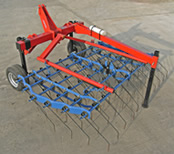 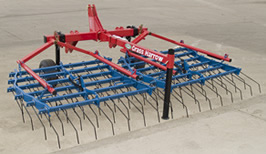 The 6m comes in two different formats, one unit has 3x2m sections the other has 4x1.5m sections. The 3 section unit is able to fold down to 2.5m for transport which enables easier movement through narrow gateways and down the road. On the other hand the 4 section unit folds to 3m for transport but has improved contour following ability in the field. 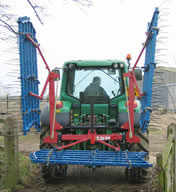 The 9m, 10.5m, 12m and 12.4m uses a hydraulic scissor folding mechanism to keep this wider range of machines to a transport width of or under 3m.

Grass Seeder for illustration purposes only and does not come with the Scissor folding Grass Harrow. Please see our Grass Seeder page for more information.

7mm or 8mm Tines, that is the question?

Many farmers automatically believe that the 8mm tine will do a better job because it is stronger. That's not necessarily the case! The key to making the best job with your harrow is getting the tines to do the work. A spring tine is designed to "spring" causing the point to oscillate from side to side. On a Grass Harrow this makes sure all the ground is covered by the tines and achieves the maximum effect from one pass. In many cases the 8mm tine can be too rigid and simply drag through the sward in a straight line with no "spring" effect. As a general rule of thumb choose the 7mm tine when you are predominantly working on temporary grassland (leys under 5 years) which is being regularly cut for silage, grazed and managed. Choose an 8mm tine when you are using the harrow on old permanent pastures and rough grazing in the main.

"When it came to the grass harrow, there was no competition. The crust was destroyed and the trash cleared. As a light cultivator it has proved to be really useful. To us it is really a dual purpose harrow, as useful on the grass reseeding work as it is on ordinary grassland harrowing."

"This harrow appears to be so effective that I may be able to forget spraying." "It seems to be an excellent tool that does what it's supposed to do, and because it folds up for transport it's very easy to move from field to field."

"The machines are excellent - there's no two ways about that. They have now covered over 4000 acres and they are still on the same tines. Obviously they are a bit worn but I think they will do another season. We are absolutely delighted with them."

"It's the best bit of money I've spent for quite a while... chick weed is very shallow rooted and spreads like a carpet, but this new machine rips it out beautifully with the rake of the tines set in the middle of the range I reckon it has paid for itself in two years with the money I have saved by not having to spray."

"I think it's the best thing since sliced bread. On grassland it's much better than a chain harrow. I shall also use the harrow on the barley and the sections are so flexible that I can even run it down the potato ridges if they get a bit weedy."

Options & Accessories
Back to top 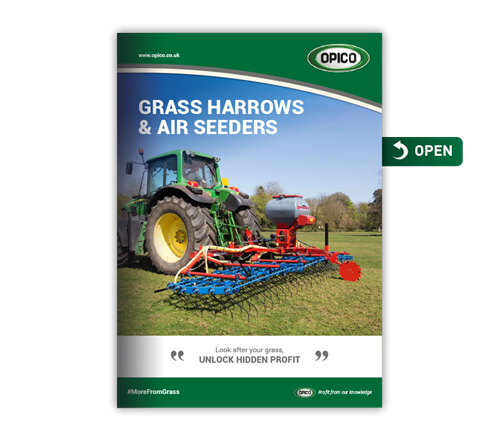 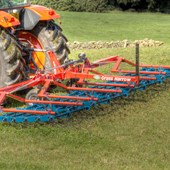 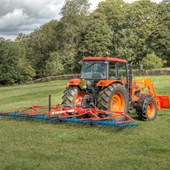 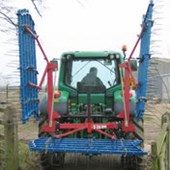 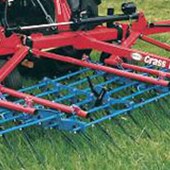 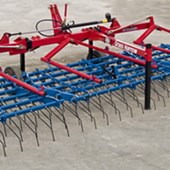 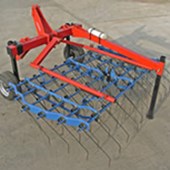 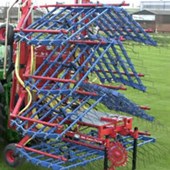