A simple change in cultivation practices has seen the time taken for seedbed preparation slashed for one Lincs grower.

A non-inversion ‘min-till’ approach has been in place at Hall Farm in Fiskerton for several decades but it’s been a fairly intensive strategy involving heavy discs, sub-soilers, cultivator-presses and cultivator drills.

“We’ve been fairly old-fashioned in our min-till regime – it regularly saw five or six cultivation passes before we could go in with the drill,” explains Henry Ward.

“Really it was maximum tillage. Aside from the obvious cost of this approach, it was way too time-consuming. We’re on extremely heavy clays so the ground has to be turned around when dry without losing all the moisture. If we weren’t careful we’d end up with either baked clods or wet, unworkable slop. We had to find a different way.”

Two passes from a set of heavy discs followed by a sub-soiler and further couple of runs with a tined press were previously the standard approach when preparing ground for wheat. It was fairly obvious that a single tool that combined all these elements could be employed to do the job in one or two swipes. 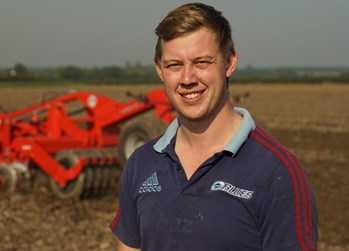 “Having done my BASIS and FACTS training and taken over management of our cropping I could see it was our cultivations that were making it hard for our cereals to clear a profit.

“I was determined to get things back under control but without detriment to the performance of our crops. So two years ago we trialled various different cultivators - all combinations of discs, tines and presses.

“They all did a decent job in their own way but one particular machine stood out for its versatility – HE-VA’s Combi-Disc. The simple fact that everything on it is hydraulically adjustable means it can be run as a straight sub-soiler or disc-harrow or any combination of the two.”

When priced up against the competition, the Danish-built tillage tool was felt to offer good value for money, especially given its abilities to do a range of different jobs. The 3m, five leg set-up was a good match for the farm’s two Challenger track-layers and consequently Mr Ward placed an order for a trailed Combi-Disc.

It arrived in mid 2016 and has since been employed in preparing ground for much of the business’ cereal cropping with a sub-soiler seeder being used to establish oilseed rape.

“We generally use the HE-VA ahead of all our winter wheat. It often goes in straight after the combine. With the legs in to a reasonable depth it creates a well-drained, corrugated surface than can stand the weather. We’ll then leave it to get a flush of weeds before spraying off and drilling in late October.

“However we can vary the surface finish thanks to the ability to adjust all the different elements so if we want to drill straight away we’ll set it for a finer tilth.”

That facility to alter everything from the cab is not just used when swapping from crop to crop. With GPS auto-steering on the cultivations tractor, the operator is able to concentrate on constantly tweaking the settings for the individual soil-engaging parts across the field to get the best possible finish – a key in ensuring extra passes are not required.

The design of the individual elements is also a key factor in the quality of the finish produced.

“The HE-VA discs are virtually straight so they don’t peel out long, ugly strips of clay like more concave designs. We can set them to move the least amount of soil to produce the best possible tilth – often they’re just scuffing the surface behind the legs,” says Mr Ward.

“The size of the ring press also makes a big difference. Being bigger diameter than most other machines, it does a better job of packing down the surface and breaking up clods.” 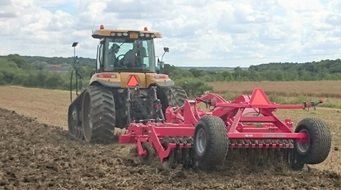 With the 3m machine running at 7-8kph, workrates generally stand at 1.6-2ha/hour (4-5acres/hour). While this may not seem staggeringly rapid, the fact that the Combi-Disc has eliminated two to three passes from other pieces of equipment means there is still a considerable time and fuel saving.

“Admittedly the Challenger will get through a tank-full in a decent length day with the Combi-Disc working to full depth but with the fewer passes from other bit of kit, it’s still much less diesel burnt overall.”

More importantly crop performance hasn’t been compromised as a result of the reduction in tillage intensity. Quite the reverse in fact.

“We’re doing just the same jobs as before – sub-soiling, discing and pressing – but more intelligently so there’s been no detriment to rooting and moisture/nutrient uptake,” says Mr Ward.

“It’s too early to say if there’s been any impact on overall yields but the crops certainly look better than before.”