OPICO Magna 4810 semi-permanent re-circulating batch dryer: The heat is on. 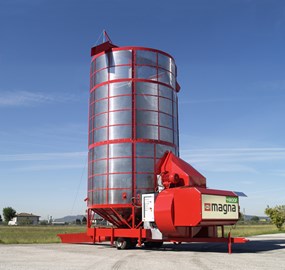 The Broster family has farmed in North Cheshire since 1934.  Relocating the main farm to a better position in the middle of their operations created the need for a new on-farm grain drying and storage capacity.  Thoroughly costing the project before putting together a well thought out design at the pre-planning application stage, led to the installation of an OPICO semi-permanent re-circulating batch dryer.  Over the years the farming business has diversified as Dave Broster explained.

"Together with our yards at Wigan and Irlam, we run a green waste composting operation alongside our farming activities. We also have Brosters Environmental at Todmorton, which is an in-vessel composting facility.

Compost operation
"We spread compost on our own ground, saving on potash and phosphate and only buying nitrogen. The beauty of the compost site is that it enables us to provide full employment for 21 members of staff.

"On the farming side there's 320ha of arable ground growing milling wheat, oats and barley. Plus a further 325ha of grassland where we produce conventional hay bales and haylage for the equestrian market.

"We've used OPICIO dryers since I was young, we started with a six tonne model, upgraded to 12t in about 2000, then in 2010 added a second 12t dryer which went back-to-back with a hopper in between.

The Opico Magna 4810 batch dryer offered them the 48 tonne capacity they were looking for he continues.

"We explored other options, such as a 60 tonne continuous flow system, but it was going to be £500,000 with buildings included. The entire project including the Magna 4810 has come in at around £200,000. The lower capital cost and good residual values were definitely a factor in our decision to buy the Magna 4810."

Not that he has anything against continuous flow drying he adds.

"But the Magna's easy to remove, providing a trade-in option in eight or ten years. We'll detach the auger, take the top panel off the belt, unwire it, put a tractor on the front and wheel it out."

"However the main reason we decided on a batch dryer was its ability to remove screenings, clean and polish the grain, which will increase hectolitre weights. Basically, batch processing gives us a better sample; it's all about getting a clean crop."

The oat crop goes to Mornflake Foods in Crewe for porridge oats, the buying specification is generally set at a minimum of 52kg/hl.

"The sample must be clean, as we don’t want to be penalised on screenings. We cool to below 80 °Fahrenheit before we store, it can take an hour to reduce the temperature but in that time it's also freshening the grain."

The Magna dryer is self-contained within its own building and is fitted with an OPICO SkyVac. Because of the size of the scheme a full planning application was made to the local authority. 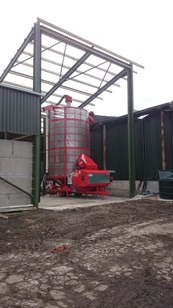 "The application was validated in December 2015 and a decision issued in April 2016. The only hiccup was when the planning authority wanted to restrict operating hours, but dropped the idea when we pointed out it would probably be the only corn dryer in the country with limited operating hours!"

Graham Heath Construction erected the buildings, while the ground works, concreting and fitted the conveyor was managed in house. Then OPICO came in and built up the dryer.

"We were also removing a system at our composting site -  John Herbert belting was used there for in-vessel composting, we recycled that and incorporated it into the grain store conveyors."

A 350kva three-phase diesel generator powers the dryer and elevator system, although the peak load requirement for the dryer is 240kva, and kerosene fuels the burner. Loading, drying, cooling and unloading grain is all automatically controlled, together with a programmable cooling cycle.

Once loaded, grain circulates through the dryer and is heated by a Duax Heat Core burner. The barrel shaped steel burner chamber is lined with heat retaining bricks as they heat up the core of the burner heats air which is pulled through by a centrifugal fan producing 1700m3/min.

OPICO quotes a drying capacity of 5% moisture reduction from 21% to 16% at a rate of 20t per hour, which includes loading, heating, cooling and unloading time.

The Magna 4810 has an operating height of 9.24m with the SkyVac fitted, although Dave Broster allowed a height of 10.06 for his building. The dryers top section has to be dismantled for transport, which then brings the height down to 4.3m, and takes about a day to refit, so Opico suggest they're probably better left in situ for the drying season.

Custom built loading area
There's a fully contained loading bay to the rear of the dryer building, where a trench-conveyor feeds the dryer. Adjacent to this are two grain stores one of which is divided in half with grain panels. A cleverly designed system of suspended dual conveyor belts, each fitted with a couple of grain shoots, can be switched to deliver grain to the front or rear of the building or to either side of the grain wall.

A similar system feeds the second building enabling three separate crops to be stored in close proximity.  High roller shutter doors allow for a fully raised grain trailers to enter or leave all the buildings. When the sheds are empty they're used to store fertiliser and machinery.

"The dryer sits in its own place, it's hard wired in to the building, there's a duct underneath to a cable which goes to the generator. We didn’t want a loading hopper or a pit in the unloading bay, so have installed a flat floor with a trench conveyor to take the grain into the dryer. The auger is concreted into the ground, we've made a frame so that if you back over it with a tractor and trailer you don’t squash the auger - we've made it idiot proof."

Vermin proof
The auger is sealed at the bottom, lifts out for cleaning and there's a vermin proof plate over the top when its not being used. "In fact, we've sealed all the corn storage buildings to make everything as vermin proof as we possibly can," adds Dave Broster.

"A horn sounds 30 seconds before the elevators come on and the dryer empties, additionally a SMS text message lets me know what's happening. The grain storage areas also have override switches to cut power in an emergency.

"Between 12pm and 5am it can process two loads, so can dry around 90 tonnes while I'm asleep.  We pile it up on the floor over the trench so it loads itself twice. It's the nearest thing to a continuous flow system we can come up with.

"You can also programme it to top up with more grain every five or ten minutes or half hourly, depending on what you're drying. It's so easy, 48 tonnes out and before you can even think it's refilling, you're just busy with the teleporter." 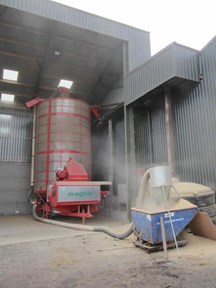 The SkyVac comes in for some credit. "It is just fantastic it fetches a lot of whiskers out. On oats it brought out empty shells, which looked like grain coming out but they were empty.  Last year we had an excellent sample because we got the screenings out."

The barley came in at 12 – 13% moisture, so didn’t need heat but was given a 2.5 hour conditioning cycle with the SkyVac to improve specific weight.

"We grow six-row hybrid barley, Valiant and Bazooka for feed. We don’t have the best of land so two row barley is not really favourable for us."

This year they've lowered seed rates from 112 kg/ha to 90 kg/ha. "The crop looks well at the moment. We also have one field where half is sown at 115 kg/ha in Bazooka and the other half with Cassia, a 2 row barley sown at 150 kg/ha so that'll be an interesting comparison."

The soil type is heavy clay he continues but spreading compost has reinvigorated it. "There's a noticeable increase in organic matter. The compost we use is weighed and mapped to the field, so we know exactly what's being spread."

"Our agronomist Paul Sweeney has taken soil samples and in composted fields the soil has an average index of three on the potash and phosphate. By comparison similar soil in a nearby field that's not spread with compost is still index one. The compost has improved the soil and the combines yield monitors record better crops where we've spread compost."

With the purchase of a 7-furrow Kverneland plough, the Broster's have returned to ploughing.  "We have general rye grass and weed problems, but minimal blackgrass. We've been using a Sumo and discs, but with min-till I've found lower yields than compared to ploughing. For our system ploughing is better."

"We've recently changed to a 6m Vaderstad Rapide drill it's very accurate and everything is doing well.  I was dubious about the drill because of its weight, on our weighbridge it's 8340 kg precisely, however we tried it on demo and it was good on the heavy land."

With land up to seven miles in either direction from the farm, at harvest time three tractors and trailers cart grain. Every load goes over the weighbridge before being tipped in the grain store and the field it came from is recorded. This information is then combined with the dryer readings, fuel use etc., and analysed to provide detailed performance information. 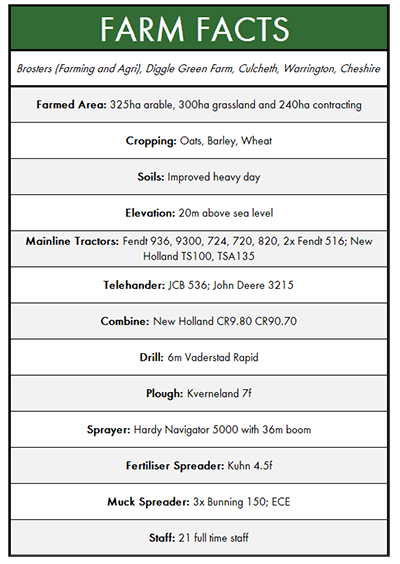 "Last years final weights were close to the weighbridge records, as we conditioned more than we dried, particularly on the oats and barley. We burnt 3500 litres of kerosene on 1100 tonnes of wheat, some came in at 14.5 -15% moisture but when we started combining it was 18%.

"We can fill the dryer with barley in about 18 minutes and unload in 36 minutes. It takes about two hours to add 4kg/hl to a fully filled dryer, when we were doing the barley it was taking two and a half hours to condition, polish and get all the whiskers off."

"It takes a while to implement a new system but there were no teething problems with the dryer itself, we did have trouble turning the elevators to empty, but that was an electrical problem on our side of the job."

"When we did the autumn barley the grain shoots were up in the auger and with winter wheat we never closed them so wheat flooded the belt out, but that was nothing to do with the dryer."

"Overall the dryer's been fine, the burner flicked out a few times, but I think that was how we set it up. The burner works well on kerosene, last year I filled the tank at 22p litre, but I haven’t priced this seasons' fuel yet. The dryer has a 1000l fuel tank, I added a 5000l external tank and we've piped it direct so we won't run out if we're drying over a bank holiday weekend. Initially the dryer seemed complicated but it's not, its brilliant and I'm very pleased we went for it."