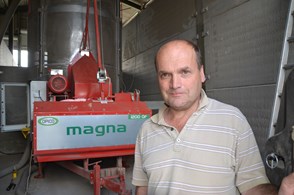 When Peter Clappison moved to his new farm two and a half years ago it was something of a project. Not only had the land been uncared for but the farm buildings were seriously neglected.

“When I first took over the farm it was a bit run down. There was a lot of work to be done sorting the drains, putting in tracks and renovating the buildings so they could actually be used.

“On top of all that there was a horrendous blackgrass issue which meant we had to fallow a good proportion of the farm in that first year.”

Having been forced to move from his family farm on the banks of the River Humber following a breach of flood defences, since then he has been focused on setting up at the new farm with infrastructure that’ll comfortably stand the test of time for another 20-30 years.

With growing crops in the ground in that first season, one of the first priorities was to sort the grain storage issue.

“There was a pretty ramshackle building in the middle of the yard which couldn’t be salvaged so we identified that as the site for the new store.

“With 430acres of cropping I wanted at least 750tonnes of storage to comfortably handle what we’ve currently got and to future-proof us for any further expansion.”

Concerned about not over-complicating the set-up, he set about designing an ultra-simple store with as few moving parts as possible.

“At the old farm we had a 55 year-old Alvan Blanch static continuous flow dryer with bins. It had done good service but was only capable of handling just over 3 tonnes an hour when pulling 5% moisture out.

“With all the associated elevators and conveyors it was pretty maintenance-heavy set-up so I wanted to get away from that. Initially I priced up another static dryer as I’d been used to having a continuous flow but quickly became apparent that the investment required couldn’t be justified on our small acreage.

“Having done my sums I could see that a batch dryer was the most cost-effective option and made for the simplest installation.”

With that in mind, he looked around at what was on offer. Already dealing with Ripon Farm Services for his three John Deere tractors and combine, he felt confident he would receive solid back-up from the company which also holds the franchise for OPICO mobile dryers.

“OPICO has a strong name for its dryers and when it came to it they were good on price. I got some advice on which model would best suit our acreage and settled on a 12-tonne diesel-fired Magna.

“I opted for an oil-burner rather than gas because it just keeps things simple with one fuel tank for the whole farm. I was keen to avoid tying up a tractor on the dryer so rather than a pto powered machine we splashed out on three-phase electrics.”

The new building’s design comprised two 360-tonne bays down each side and a central passageway divided off with concrete panels. It was this space ear-marked for the dryer, positioned under the apex to provide maximum headroom for its twin unloading chutes to send grain into either left or right-hand bays simply with the aid of gravity.

With it installed ready for harvest 2018, the Magna was put straight to work and immediately proved its worth taking two to two and half hours to bring 18-19% moisture grain down to a sensible 13.5-14%.

“It’s a huge step up from the old dryer even though you’ve got the time loading and unloading the batches. The cooling cycle is very efficient and the grain comes off nice and cool.

“The computer ’s automated features are just brilliant – I can load up the dryer and set it going, fill the pit again with another 12 tonnes and it’ll then dry the first, cool it, discharge it and reload and repeat the cycle with the second batch. That way I can do it last thing at night and not worry about it until the morning by which time it’ll have processed 24 tonnes.”

The other feature that gets particular praise is the SkyVac dust extractor and its ability to turn a dull-looking sample into something that merchants will scramble to get their hands on.

“It’s surprising just how much the SkyVac pulls out – a fair heap gathers under the outlet. It really cleans up the sample and polishes up the grain.”